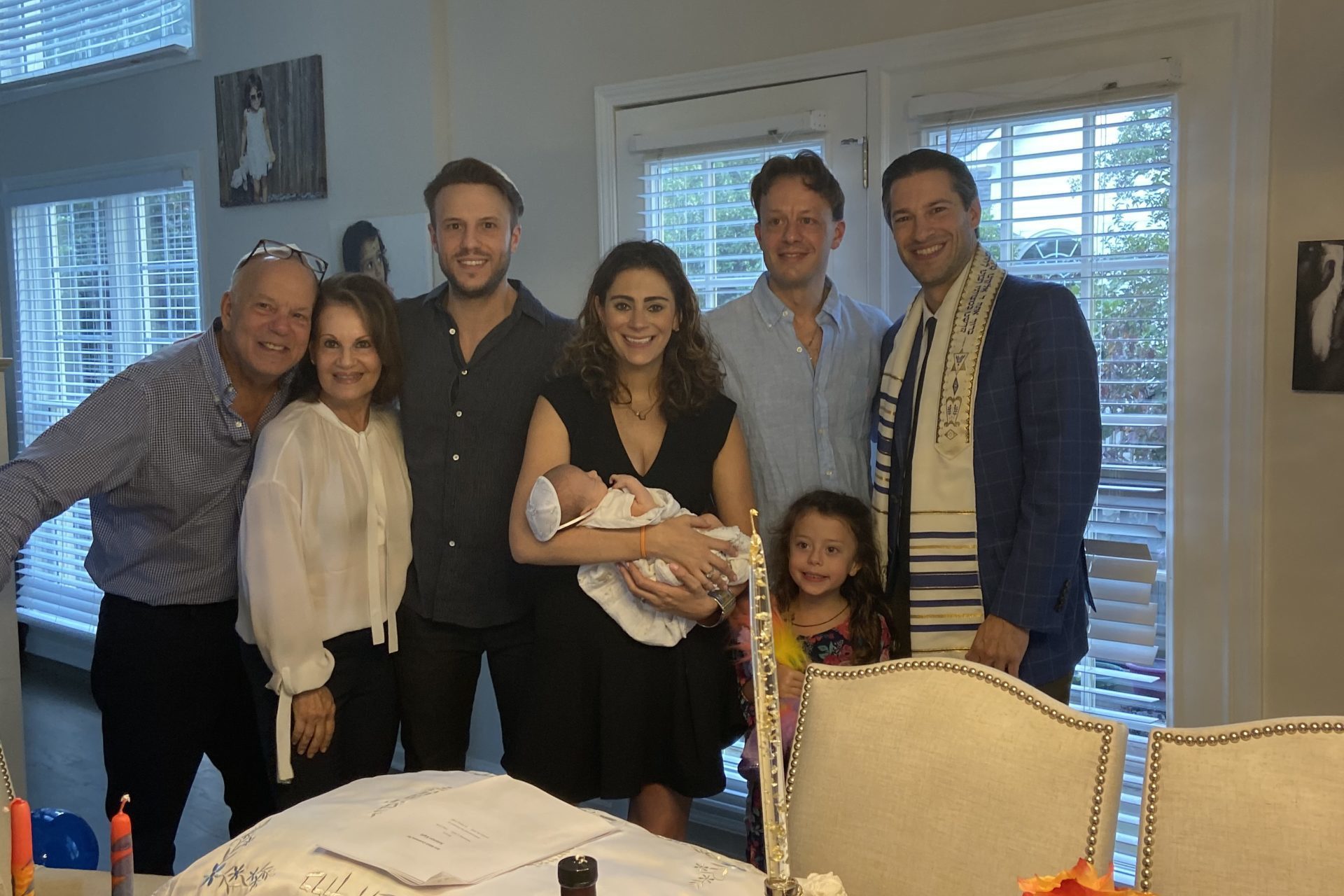 When a new Jewish baby comes into the family, it’s prime time to gather and celebrate. Traditionally, on the eighth day of life, babies assigned male at birth have a brit milah where they’re circumcised and given their Hebrew name. But what about families opting out of circumcision? Brit shalom encompasses a variety of ceremonies specifically for these families. It’s a baby naming — and a whole lot more.

In one sense, a brit shalom is nothing more than a naming ceremony for a Jewish baby who isn’t being circumcised. But it’s also a sign of the ancient Abrahamic covenant—and a declaration of intent to bring up the child Jewishly. A deeply spiritual and joyful act, brit shalom is a statement of pride in being both Jewish and non-circumcising members of the community.

Many American Jewish parents have their babies circumcised in the hospital, without any ritual, alongside their non-Jewish peers—a trend that began in the mid-20th century. When we talk about Jewish naming ceremonies for boys, it’s generally code indicating that there’s been a hospital circumcision. This convention, though it doesn’t adhere to Jewish law, is widely accepted in Reform and other progressive movements of Judaism.

Brit shalom is specifically for babies who are not circumcised. What’s the difference and why does the distinction matter? For many non-circumcising Jews, it comes down to spiritual authenticity, honesty and openness.

Many rabbis expect or assume that parents asking for a baby naming have had their child circumcised in the hospital. But what about those opting out of circumcision? Non-circumcising parents are often left to wonder what will be accepted. Sometimes, instead of telling the rabbi their child isn’t circumcised, parents might decide to say nothing. And instead of asking parents directly, the rabbi might choose not to ask about circumcision status. It’s a classic “don’t ask/don’t tell” situation.

Brit shalom avoids this scenario, which can be especially anxiety-producing for non-circumcising families since it leaves many open questions and can lead to fear of being “outed.” Further, not saying and/or not being asked implies that a parent’s choice to forgo circumcision is somehow shameful and necessitates secrecy. This doesn’t make for open and welcoming communities. Brit shalom makes clear that parents have specifically chosen not to circumcise and are doing so with pride and integrity.

Is Brit Shalom Just for Babies Assigned Male at Birth?

Absolutely not! Brit shalom was originally conceived to be a male-only alternative to brit milah. However, modern notions about gender and equality are changing the way many of us look at Jewish ritual — and brit shalom is no exception. Some non-circumcising families may wish to have a brit shalom regardless of their child’s anatomical gender. Also, some babies are born intersex (have a combination of male and female biological traits). For families of such children, or for those families who prefer not to reference gender, brit shalom is an option.

Ways to Have a Brit Shalom

When it comes to having a brit shalom, there are lots of choices. Rabbi-led in a synagogue is an option, but these ceremonies can also take place at home, or even outdoors. A family’s prior involvement in congregational life, the time of year/weather, and what feels most comfortable for parents and baby are often deciding factors. If the ceremony is going to take place at eight days, many parents feel most comfortable at home. Parents may choose to follow the eighth day tradition — or might hold the brit shalom when it’s more convenient.

If your family is having a brit shalom, you’ll probably want to assign roles (for example, kvatter and sandek, who are honorees) and have a few things on hand, including chosen prayers, kosher wine, a kiddush cup, a challah, a ceremonial chair, a pillow for the baby to rest on, etc. For more information about what you might need and why, you may wish to pick up the book Celebrating Brit Shalom (Notim Press, 2015). This guide includes a choice of three ceremonies, as well as helpful advice and original songs. It can be used whether you’re planning to have clergy officiate or go the DIY route.

How to Have a Brit Shalom

There is no standard formula for a brit shalom, and parents and/or clergy should choose blessings and readings that are meaningful both for the moment and for the specific family. Planning the brit shalom is a creative act. Liturgy might closely follow that of brit milah, with the act of circumcision being replaced by something symbolic, such as cutting a pomegranate. Another choice is to wrap the baby in a tallit, or to wash the baby’s feet by pouring warm water over them. Footwashing is described in the Torah as an act of respect and welcoming the stranger.

What Happens After Brit Shalom?

Jewish services and celebrations are usually followed by a festive meal. New parents might be too tired to want to cook, so ordering in or having everyone bring a dish to share are popular options. It’s a matter of personal choice and budget whether your brit shalom is a fully catered event or a simple potluck. There is no one right way to have a brit shalom, although it’s wise to keep things on the shorter side, as parents and baby will typically crave rest and privacy during the newborn period.

How Did Brit Shalom Start?

Although some Jewish people throughout history have chosen not to circumcise, replacement ceremonies for the traditional bris are relatively new. One of the first known rabbi-led brit shalom ceremonies took place in the mid-1980s and was officiated by Rabbi Nathan Segal (1949-2019). In addition to being a non-circumcising Jew, Rabbi Nathan was also a musician and singer, and performed Jewish folk music at the Woodstock Music Festival in 1969.

Early on, it could be difficult or even impossible for parents to find a rabbi to perform a brit shalom. It was just too new and outside of mainstream Jewish practice. So parents had to get inventive, and an underground grassroots movement was born. Parents passed along the names of willing officiants, who shared newly-created rituals. Prior to the publication of Celebrating Brit Shalom, photocopied pages of brit shalom liturgy were passed along parent-to-parent and rabbi-to-rabbi. These stapled copies — some of them in Bruchim’s archives — are among the first examples of family- and rabbi-led brit shalom ceremonies.

One notable exception to the difficulties experienced by non-circumcising Jews is for those members of the non-theistic movement known as Humanistic Judaism. Founded in the early 1960s by Rabbi Sherwin Wine, Humanistic Judaism has always rejected the necessity of circumcision. Rabbi Wine did not use the term brit shalom, but rather advocated naming ceremonies without regard to gender.

In the early aughts, Mark Reiss, M.D. stepped up to the plate with an innovative concept. A retired radiologist and an active member of his Conservative congregation, Dr. Reiss felt compelled to help Jewish families seeking circumcision alternatives. He compiled, and has maintained, an online list of brit shalom officiants throughout the United States, Europe, and elsewhere. Today Dr. Reiss’s list of brit shalom celebrants provides the names, locations, and contact info of more than 150 rabbis who say they will perform a brit shalom if asked. Cantors and lay officiants are also included on his list. With much love and dedication, Dr. Reiss has helped merge his list with Bruchim’s expanded Inclusion Directory, which comprises inclusive Jewish institutions of all kinds. Bruchim is proud and honored to carry on Dr. Reiss’s important work.

Although brit shalom is more widely known about and practiced than ever before, many Jewish websites and parenting guides omit any information about ceremonial alternatives to brit milah. Bruchim believes that ignoring the existence of non-circumcising Jews does not build authentic, vibrant Jewish communities. Bruchim’s mission is, in part, to effect meaningful change in this regard. While we’re working on it, we’re also making sure non-circumcising Jews have the supportive resources they need.

Would you like a free ceremony from the book Celebrating Brit Shalom?