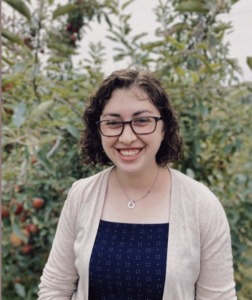 Hailing from Bethesda, Maryland, she calls Temple Micah in Washington, DC her home community. Emily was inspired by her rabbis from a young age to pursue Jewish learning and sincere community. As a participant in Operation Understanding DC in high school, Emily decided to pursue a career in the Jewish world that is committed to tikkun olam, repairing the world, and tzedek, justice. Emily attended List College at the Jewish Theological Seminary and Columbia University, earning a B.A. in Jewish Thought and a B.A. in Ethnicity and Race Studies. To complement her academic study of Judaism, Emily became immersed at the Columbia/Barnard Hillel, becoming a leader in the Reform group and inter-denominational efforts.

During her time at HUC-JIR, Emily has become dedicated to liberal Zionism and having honest conversations about Israel. She has participated in a variety of Israel fellowships and served as the rabbinic intern for ARZA, the Association of Reform Zionists of America. Emily has taught in several synagogues around New York City and spent two summers working at Sprout Brooklyn, a Young Judea Hebrew-Immersion Day Camp. She served as the rabbinic intern at Congregation Shir Shalom of Westchester and Fairfield Counties and spent two High Holy Day seasons leading services for students and community members at the University of Rochester Hillel. Emily completed one unit of Clinical Pastoral Education at NY-Presbyterian Hospital and is currently the Pastoral Intern at DOROT, providing spiritual care to seniors.

Emily is passionate about the intersections of disability and illness with Judaism. Together with a classmate, and thanks to the Be Wise Fellowship in Jewish Entrepreneurialism, Emily co-founded Wondrously Does/n’t: A Space for the Jewish Body. This project hosts monthly gatherings for young adult Jews to explore their relationship with invisible illness and Jewish ritual through creative ritual design, text study, and community.